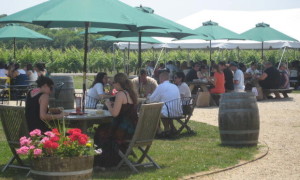 A Manhattan judge, in a case of first impression, has reversed the State Liquor Authority’s decision to revoke of the liquor license of a Long Island farm winery.

Justice Doris Ling-Cohan (See Profile) dismissed three of six charges brought by the Liquor Authority against Vineyard 48, located in the Town of Southhold on Long Island’s North Fork, and declared that the penalty of revocation on the other three remaining charges “shocks the court’s sense of justice.”

The Liquor Authority had charged that the winery had violated its farm winery license by “permitting a dance party type atmosphere.”

Neighbors in Southhold, which is about three hours from New York City, alleged the winery owner had “turned the place into a rock concert venue, complete with violent, lewd and drunken behavior.”

Liquor Authority Chairman Dennis Rosen, at a Dec. 17 board meeting to adopt the revocation recommendation of the administrative law judge, voted to revoke the license.

“I think I know what a wine tasting is,” he said, adding that Vineyard 48’s “DJs, dancing and nightclub atmosphere” did not fit the definition.

But Ling-Cohan held in Joseph Paul Winery v. New York State Liquor Authority, 101755/2013, that the authority ignored its own due process protections as well as the state’s Administrative Procedure Act by allowing complainants to testify before the authority’s governing board without prior notice to the winery. The witnesses were not sworn, nor was there an opportunity to cross examine them, she said.

She said that despite a statutory requirement that the authority issue regulations defining permissible activities by a farm winery licensee, none had been adopted since 1974, when the Farm Winery Act was passed.

The statue permits “wine tastings” but does not define the term or prescribe any requirements, other than the proprietor be personally present and that only New York-produced wines may be served.

Ling-Cohan said the permitted activities under the law were “extremely broad.” A farm winery may “engage in any business on the licensed premises subject to such rules and regulations as the SLA may prescribe,” the statute states.

While Rosen, the authority’s chairman, ” claims to know what a wine tasting is,” Ling-Cohan wrote, “unless petitioner and the wine-making community are also mind readers, his personal and subjective opinion as to how to conduct wine tastings” was irrelevant in the absence of any duly enacted regulations.

Ling-Cohan held the dismissed charges to be void for vagueness.

Some 291 farm winery licensees are operating in the state, and no other farm winery has had its licence revoked, according to the opinion.

Vineyard 48 continued to operate during the legal proceedings.

“The wine tastings of today are not the same as your grandmother’s day,” said Peter Sullivan, of the Manhattan firm of Sullivan, P.C., who represented Vineyard 48. “Virtually every winery in the state has to provide live entertainment in order to make a profit.”

Sullivan said the property has been operated as a farm winery for 20 to 25 years, and the current owners have been the licensees since 2006.

“The town has withdrawn all the proceedings against us, and we have agreed to a plan of activities that will be acceptable to everyone except a few malcontents,” Sullivan said

Ling-Cohan said that the Liquor Authority had “utterly failed to refute any of petitioner’s core legal arguments,” noting that it “inexplicably” had not filed a memorandum of law or any supporting affidavits.

She held that the board’s Dec. 17 meeting where it “allowed unsworn testimony outside the record,” violated the winery’s due process rights.

Jacqueline Flug, chief counsel to the authority, represented the agency in the Article 78 proceeding. She did not respond to a request for comment.

Noting that the ALJ’s hearing transcript was 1,158 pages, Ling-Cohan criticized both parties for not “having the courtesy to provide the court with appropriate citations, wasting considerable judicial resources,” which she said have been constrained by budget cuts.

Ling-Cohan said “the extreme penalty of revocation, in the absence of any prior prosecutions of violations or notice of objectionable conduct” was unwarranted for the three remaining charges. She ordered that if the authority were to issue a penalty, it had to be a lesser one than revocation.